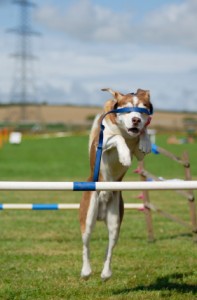 Top 5 Hurdles to Vault Before “App-roaching” an App Developer

I have come to dread parties. The minute people find out I’m an app developer, the conversation starts: “I have a great idea for an app, and I’m sure it’s unique and will be a real money maker. Let me tell you about it….”

Sigh. The truth is out there, and it’s tough: very few people make money from apps. And, just as with business models, often a good idea does not translate to a successful app.

So as a public service and to make my life easier, I present the Top Five App Idea Hurdles, below. This is not to discourage anyone from dreaming, but maybe to encourage realistic dialogue after the first flush of creative enthusiasm.

I. Is an App the right Approach?
Why does it have to be an app?  Apps sure sound cool, but many ideas will work better and reach more people on a mobile-friendly website.

II. Competition
Is there something like it already? With over 1 million apps from over 200,000 publishers in the iTunes store alone, there probably are dozens like your idea – how would your app be different? Even a specialized app like Mindful Bear’s Drum Journey has competitors – there are eight apps for shamanic journeying in the iTunes Store!

III. Promotion
You’ve built it, will they come? The average iPhone user has about 40 apps installed, but spends only 39 minutes per day engaging with apps – that’s a lot of competition.Whether you are selling the app or giving it away for free, you need a plan for reaching your target audiences.  First of all, do you know what percentage of your potential users actually have a smart phone?  How will you stand out in the crowd?  When you app is first published, you’ll  have to sell (or give) each copy, one at a time; think about how you will build a base of evangelists, who will market the app for you via referrals, testimonials and reviews.

IV. Plan to Measure
How will you know if a given tactic or evangelist effort is working? It’s a truism that you can’t manage or improve what you don’t measure. Number of downloads is just one measure of success – what happens after the app hits the phone? Are people using the app? Are they using it in the way you thought they would? Is there a particular market  (geographic or other) that is doing better than others? The App Store gives you some metrics (the number of apps downloaded per country), but it’s up to you to take the metrics seriously and adjust as needed.

V. MONEY!
Perhaps most importantly, how will you make money with your app? The market deck is stacked against new entrants, as just 25 developers account for half of all app revenue, according to a recent study. Even if making gobs of cash is not your goal, there are significant costs involved with creating the app and getting it into the Store. I usually estimate 200 hours of developer time for even the simplest apps, and developers do not come cheap. Your fabulous Whack-a-Mole app idea is not unique! There are already quite a few mole-based apps: Super Mole Escape, Mole Kingdom (1, 2, and Deluxe), Mole Detective (1 and 2), Word Mole, Mole Word, and of course, Angry Moles, to name just a few. OK, your Whack-a-Gopher app  — I only count 20 apps with the word gopher in the title — could easily cost $25,000 to develop. That’s a lot of $1.99 downloads or ad views.

If you’ve cleared all these hurdles to your satisfaction, then you’re ready to move forward. Smart phones are booming – over 17 million devices were activated on Chrismas Day alone last year, according to Flurry.  There’s always room, even in a crowded market, for the next great thing – and maybe your app will qualify. Good luck!

David Mojdehi, @MindfulBear, is a software engineer who has been developing apps since 2009; he focuses on apps that promote spiritual practice. Nancy Roberts, @LeapingOtter, helps out with the marketing.